Agent to run Race for Life one year after husband's death

As we have said before, we cannot mention all the countless good deeds and charity fundraising events that our big-hearted readers do for good causes.

There are, quite simply, too many – something that may come as a surprise to those critics of the industry who have no idea how generous so many agents are with their time, effort and own money.

However, we do make an exception in highlighting estate agent Paula Scinaldi, branch partner at Harrison Murray’s Duston office in Northamptonshire.

Paula will be running the Race for Life in memory of her husband Tony, who died only last year from cancer, aged 46. The couple had been married for just under 13 years.

Paula could choose to spend the first anniversary of his death quietly, but has chosen to take part in the Race for Life on June 9 for the first time.

She said: “It has been a tough year but I’ve received a lot of support from family, friends and Harrison Murray, and the Race for Life seemed like a fitting tribute to Tony and the many other people who have been and continue to be affected by cancer.

“This is the first Race for Life I have ever taken part in, and I am preparing myself for an emotional yet memorable event.”

Paula, who is marking her tenth anniversary at Harrison Murray, will be joined at the Abington Race for Life by her sister Georgina Smith, life-long friend Hina Raichura and colleague, Duston branch secretary Sam Keates.

Sam, on the left, is pictured with Paula as they prepare to run the Race for Life in memory of Tony.

Anyone wishing to sponsor Paula can do so here 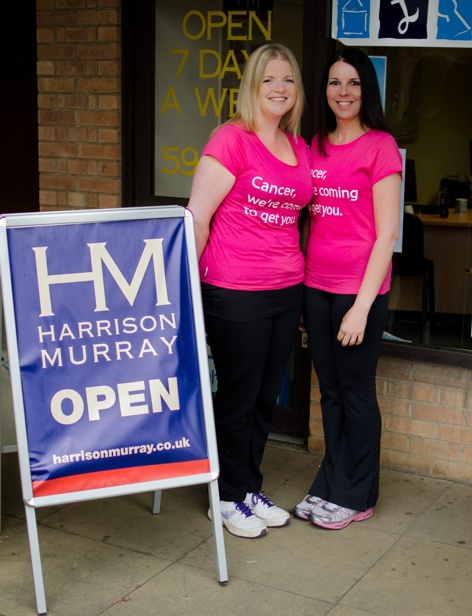