What the future holds for the lettings market

2016 has been a turbulent year. We have dealt with an unprecedented EU referendum result, a drop in interest rates, a stamp duty reform, the resignation of a prime minister and a crazy US presidential election.

All of these things have affected the UK economy this year, and will continue to do so going into 2017. And as a part of the UK economy, the property market is bound to follow.

Given recent events and our knowledge of past property blow-ups, what can we expect to happen in the lettings market in 2017?

Our main focus should be on the result of the EU Referendum. The 'Brexit' decision was the most significant in our country in living memory, and it holds the fate of our economic certainty in its hands. Theresa May has shown great conviction in her decision to pursue a Brexit, and wants a "smooth, constructive and orderly" process leading up to a predicted split from the European Union in 2019.

There is good and bad news surrounding Brexit. The good news is that the predicted fall of the UK housing market didn't happen, and Rightmove's latest house price index shows resilience in house prices, if not demand. There is also plenty of time for the housing market to continue its upwards trajectory in the next 18 months.

The bad news is that this 'save the date' in 2019 is bound to have a negative effect on the housing market, both in the lead up to and immediately following the eventual split of Britain from the European Union. We won't see a fallout like in 2008, but nobody should walk towards Brexit ignoring the inevitable downturn (the scale of which we can't predict or measure until it happens).

But to know the future, we need to look at the past. Check house prices since the turn of the millennium, during which time the housing market has had everything thrown at it. The recent Brexit, last year's General Election, the near melt down of the World Economy with the Credit Crunch, the "dot com" boom and bust, the housing market crisis in 2008, the housing boom of 2001-04. The list goes on.

It's events like these that mean we need to take a 'long-termist' view of property values to work out how to invest. The fluctuations and micro movements of monthly figures are just too temperamental for us to draw serious conclusions. 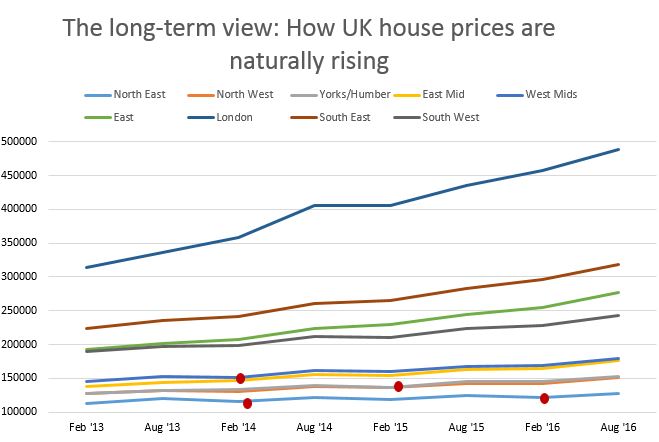 Fortunately, property experiences a natural upward trend, even if the monthly average is an ever-fluctuating figure. My advice is not to panic if values drop month by month - that isn't the right approach and will cloud your judgement as a long-term investor.
A quick word on interest rates, too. The drop to 0.25pc and the government-led quantitative easing programme - to the tune of £70bn in private bonds, no less - will have knock-on effects to mortgage lending, namely that banks will pass on the base rate to customers. However, the supply of cheaper mortgages doesn't affect the supply of houses, and the interest rate can't affect the speed of our construction and manufacturing industry.

So, even if you're worried about first-time buyers getting cheaper mortgages, which indeed they might, where are they going to find the property? They can't all buy a house because there aren't enough to go around!

In answer to my initial question - what does the future hold for the lettings market? Well, not much different than now. Brexit may impact us for six months, or a year, or two, but no sane property investor will judge the success of their portfolio on those figures. Look to the future, and the supply crisis, and the ever-increasing UK population, and you will see the future of buy-to-let is bright, even if the papers don't want you to see it.
Back to all articles