2017 house prices should increase, not decrease

In June the UK electorate made an historic decision to leave the EU. Since the furore has calmed, the Bank of England has lowered interest rates, and could perhaps do so again before the end of 2016.

Meanwhile, the question of UK house prices remains somewhat unanswered. Prices were predicted to crash when foreign investors fled from London, causing a nationwide ripple effect. However, this has not happened. In fact, the latest house price indices from Nationwide, Rightmove and Halifax have shown a surprising level of resilience in house prices since the EU referendum result.

They all note a decrease in rate of growth if not actual decreases in prices, however, there is a widespread consensus that the most notable downturn in the property industry has been actual transactions.

Will the Brexit vote actually cause a price crash? The below table shows the average house price figures from 1996, 2006, and each year since 2014. 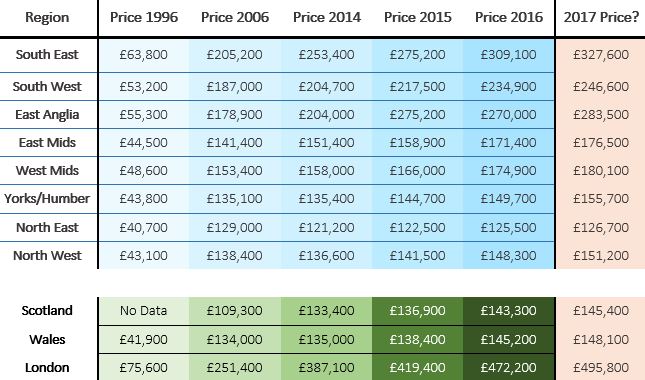 As we can see from the table above, house prices have been steadily increasing for the past twenty years, and are speculated to increase again going into next year, if at a slightly lower rate.

The 90s boom to the front end of the 2008 recession brought the most significant growth, which curtailed when the financial crisis hit. This is best shown in the northern regions where prices dropped in the eight years from 2006-2014.

Of course, the recent past is the best measure of what will happen in the future. Given the consistent house price growth in the past three years, it becomes difficult to outright predict another price crash based on the EU referendum result alone - after all, we cannot forget that no concrete outcome has actually arisen from the vote.

The question is this: Given the impact of the 2008 financial crash, is the result of the Brexit vote significant enough to halt the current upward momentum of prices in the housing market?

The answer, right now, is no. The factors that have driven prices up - low supply, increasing population and lack of social housing - still hold the same influence over current housing as they did before the referendum, it is just that the Brexit vote mitigated this growth.

The fear of a house price crash is a legitimate one, but not necessarily grounded in reality. In much the same way that a general election will slow down the markets, the referendum result has had the same effect on the housing market - indecision brought about by a new set of circumstances.

This isn't any guarantee of a sustained period of housing market deflation. The latest Nationwide house price index has revealed house price growth of 0.6pc in August, taking annual inflation to 5.6pc, an average of £206,145 across the UK - so there is empirical evidence against the claim that prices would fall after the referendum result.

How do the figures affect landlords?

The market is likely to pick up at the end of the summer, when property chains around the country start moving again; this may kick-start price increases.

Landlords needn't worry about the property market unless their portfolio was already in jeopardy ahead of 2017's impending landlord tax changes. Prices may indeed stall but are not necessarily in a position where landlords will have to deal with widespread negative equity - indeed, there may be opportunities to expand a portfolio where transactions and prices are struggling the most.

Meanwhile, the lower interest rate means buy-to-let mortgages are cheaper to obtain, plus other savings accounts are offering incredibly low yields, so the motivation to invest remains.
If you would like to know more about your local property market and investing in a buy-to-let property, contact your local Martin & Co office today.

Data Source: Denton House Research and HM Land Registry
Back to all articles