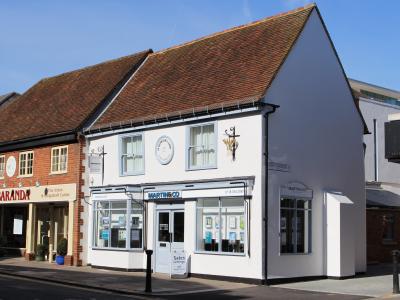 Wokingham sales and lettings agent Martin & Co has been recognised and praised by The Wokingham Society.

In a letter to the business owners Mike and Erica Townend, the Chairman of The Wokingham Society, Peter Must, wrote, â€œNow that the conversion work has been completed, the Society's Executive Committee has asked me to tell you how pleased we are with the appearance of the building, and with the considerate use of materials to achieve this outcome.â€

Mike Townend, director of Martin & Co Wokingham, said â€œWe are delighted that our stunning premises in Peach Street have received this accolade from The Wokingham Society. All our staff love the working environment here and we always get a positive comment from visitors to the office. In our opinion, the appearance of the office, both inside and outside, epitomises and enhances our objectives of offering a high quality, professional and friendly service.â€

Mike continued, â€œWe're committed to becoming increasingly involved in the local community, as evidenced by our Macmillian coffee morning in September, sponsoring the Wokingham Winter Festival in November and assisting the Wokingham Living Advent Calendar during December.â€

Martin & Co Wokingham was opened in September 2015 by the Mayor of Wokingham Borough, Cllr Parry Batth, and is part of the national Martin & Co network with almost 200 offices across the country.