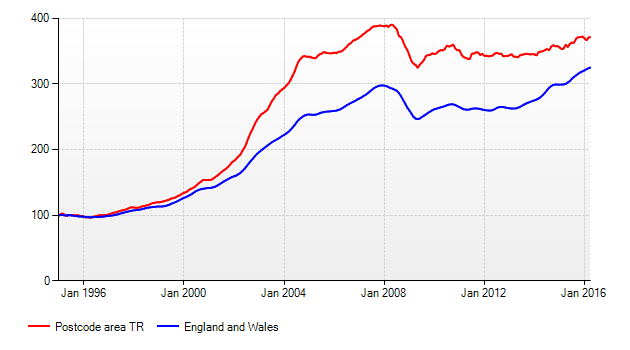 Recent data released shows that house prices in Truro continue to outperform the county average while the surrounding postcodes tend to not perform as well. The information shows that properties in the TR postcode are gaining in value faster than the national average rate. In the last five years the data shows a rise of 9.19% compared with a national average of 6.65%.

The market here in Cornwall will always be pegged back by the average earnings and now more than ever, since the government's introduction of the extra 3% stamp duty on second homes, the local market has to depend more and more on local buyers.

What does this tell us? Imagine you owned a house in the most expensive road in Truro, Pencarrick Close. With an average house price in the road of £869,757 and on the basis that in the next five years house prices continue to grow at the same rate, just by sitting still and not even putting a lick on paint on the walls the value of your home would increase by almost £80,000.

The number of transactions also matters and while Pencarrick Close is high on value it is very low on the number of sales. For the highest 'turnover' of properties look at Treffry Road (373 transactions in the last 15 years). High transactions mean you will always sell and sell quickly, however it doesn't always mean high growth.

If you're investing in an area either to live in or to rent out, do your homework first. Sure on paper you could buy an average property in Plymouth for only £165,000 but after 5 years that might only be worth £176,000 (a gross gain of only £11,000) but invest in Truro over the same period and the average gain would be predicted to be closer to £23,000.

Certainly the Brexit has caused uncertainty in the market and the top end (above £500,000) is feeling it most with interest from buyers slowing but with Truro growing as a city, employers taking on more staff and more businesses being attracted to the city (take for example Waitrose), I can't help but see a positive long term housing market. When we leave the EU prices in the short term might take a slight dip but history has always shown, bricks and mortar are a solid long term investment.

Advice is free and I am always happy to spend the time if you are looking to buy locally. Call me at the office or email me will.gentle@martinco.com
Back to all articles