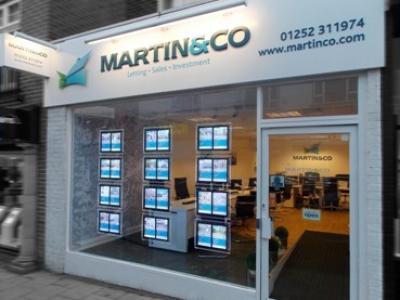 It's been quite a decade for Martin & Co's James Wiggins and Richard Oldaker.

Having emerged relatively unscathed as young estate agents during the financial crisis of 2008, the pair set up their own branch of Martin & Co just a year later in March 2009.

Now, as the duo approach their 10th anniversary as owners of Martin & Co Aldershot, they've been reflecting on a decision well made.

Richard Oldaker and James Wiggins with Phil Spencer in 2012 and now.

"Both James and I worked for another agent in Aldershot and the office I used to run actually closed down at the end of last year," recalls Richard.

"We decided to make the move into lettings as we'd had a pretty tough time in sales during 2008. As well as seeking the residual income and stability that a strong lettings business brings, we also felt that we could do a really good job for our clients and their tenants."

The pair opted for Martin & Co, a proven franchise model with back-up and support from the Property Franchise Group that would be key for two ambitious but still young men looking to go it alone on the back of 18 months of economic turmoil.

"We were confident about growing a business," adds Richard, "but we wanted that back-up and know-how that comes with a successful franchise like Martin & Co.

"Also, there were neighbouring offices in Guildford and Basingstoke doing really well, so we knew we were making the right call."

The Aldershot office in 2009 and now.

Within 18 months of starting Martin & Co Aldershot, Richard and James were managing more than 100 properties for landlords and tenants in the area.

In 2011, the branch threw its weight behind local football club Aldershot Town as sponsors and patrons of the then League Two side.

Fast forward to 2019 and Martin & Co Aldershot now looks after more than 400 properties locally - quite a change and it's been the same in Richard and James's personal lives.

"Life has changed a lot in the past 10 years," laughs Richard. "I now have two children and have moved house five times! James also got married last year."

So, what is the key to the duo's success?

"Hard work," insists Richard. "Martin & Co is a strong brand and The Property Franchise Group will give you all the tools you need to succeed and support you when you need it."

"But the success or failure of a business lies predominately with the people running it" says James "The success of the business has given us a comfortable lifestyle, but it hasn't come without an awful lot of hard work."